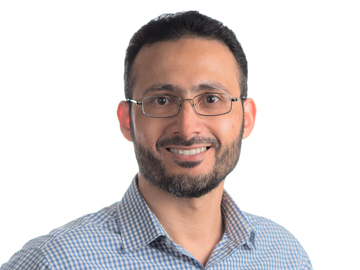 Laval University – Faculty of Science and Engineering
Department of Biochemistry, Microbiology and Bioinformatics

Ahmad Abdel-Mawgoud Saleh was a postdoctoral fellow/associate at Department of Chemical Engineering, Massachusetts Institute of Technology (MIT) in the laboratory of Pr. Gregory Stephanopoulos supported by NSERC postdoctoral fellowship (Feb. 2017 – Jan. 2019). Pr Abdel-Mawgoud received his university education at Faculty of Pharmacy, Ain Shams University (Egypt), where he earned his B.Sc. degree in Pharmaceutical Sciences in 2002 and M.Sc. degree in Microbiology in 2008. He then moved to Canada where he received his Ph.D. degree in Biology in 2014, followed by one year of postdoctoral training in 2014 – 2015 both under supervision of Prof. Eric Déziel at INRS-Institut Armand-Frappier Santé Biotechnology Research Center. During his PhD, he got numerous awards and distinctions, the most remarkable of which is the Vanier-Canada Graduate Scholarship-NSERC. In fall 2015, he accepted assistant professorship of microbiology at his alma mater where he intensively taught under- and postgraduate courses of microbiology and biochemistry before moving to MIT, Cambridge, in February 2017, until he got his professorship at Laval University in February 2019.

Pr Abdel-Mawgoud’s broad research interest lies in synthetic biology for drug biosynthesis and drug discovery. His specific focus is on the heterologous production of glycolipids in yeasts. (Read more).

He received several research funds since he has joined Laval University.